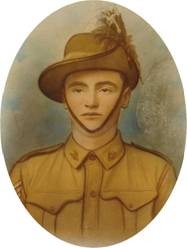 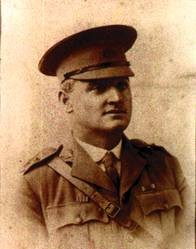 Joseph Cameron Bailey was the partner of Anna Seehusen and father of her three children.

25 Jan 1915: Allocated to embark for New Guinea on 'Eastern' with 2nd Tropical Force but was discharged

Sept/Dec 1915: "In the more dangerous sector of Russell's Top, Lieutenant Bailey and the scouts of the 20th battalion explored No-Man's Land at The Nek. On at least two occasions this was effected in broad daylight by means of the covering fire of the garrison, which carefully shot down all the Turkish periscopes in the sector while Sergeant Vince and Corporal Brennan crept forward to the enemy's parapet and examined such trenches as were within view."...

"Meanwhile on Nov. 18 the Turks had fired a mine near another shallow tunnel (H4), killing 2 Australians and wounding 3. The Australians cleared away the debris, and then pushed forward a barricade into the Turkish tunnel in which this mine had been fired. There the enemy built a barricade facing them and for several days firing continued between the two, Lieut. Bailey of the 20th shooting two Turks with his revolver, and three others being hit with bombs.

14/15 Nov 1915: "For his courageous conduct at Russell's Top, Gallipoli, on November 14/15 - 1915 - when single-handedly he drove a party of the enemy from one of the surface tunnels back into their own line. He also did splendid work in reconnoitering enemy trenches and securing photographs at great personal risk. He was severely wounded on 12/12/15 and has since returned to Australia."

16 Nov 1915: recommended for French War Cross (Croix de Guerre) for "two reconnaissances similar to those of Brennan and Vince. has also shewn conspicuous gallantry in work in Tunnels when in touch with the enemy." [Sergeants Brennan and Vince 20th Battalion received similar recommendation in the same document for advancing together over ground covered be the enemy's machine guns and by his trenches in daylight.]

12 Dec 1915: Quotation from letter: "On Sunday 12th Dec I was sitting quite still in a dug out immediately after the order for evacuation had come and 4 of us officers were talking about it when a 6" shell just dropped in and hit my leg, exploding at the same time. It took my leg off just below the knee..."

7 Feb 19196: Transferred to "Nestor" for repatriation to Australia

May 1916: Visits Grace and the children where she was teaching at Moorang (south of Rosevale, QLD) just before going south on the "Sydney Mail" train.

8th May 1916: "A returned solder with only one leg has become  a fairly familiar to Brisbaneites during this last week or so." " One one breast he wear the ribbon of the DSOI and on the other the Albert medal (obtained some years ago) and now he has to go to France to be invested with some French medal"..."He was wounded four times before losing his leg and now carries about in his right arm a Turkish bullet as a memento."

undated: a photograph exists of JCB in AIF uniform with Captain's insignia with medal ribbons on both breasts - striping pattern of ribbon on his right side matches that of the 1st class Albert medal.

However, after the war, he was appointed a Lieutenant in the Australian Army reserve from 1 Jan 1921 (2nd Military District in New South Wales.) This is recorded in Australian Forces 28 July 1921 Commonwealth of Australia Gazette p.1139.